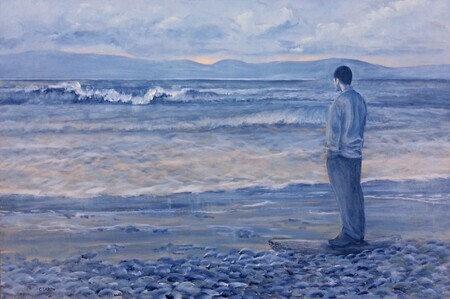 I painted this for my son, a passionate surfer since he was a kid. It was the first painting I did after I quit 'working' last year. I'd always planned to paint watercolours but, wanting to create a special birthday present for him, I realized I had to go bigger than I could currently manage in watercolour. So I switched to acrylics on canvas and went for it, not knowing if it would work out. I wanted a moody, low-ceiling day, typical of the coast's winter weather. I kept it simple, painting only with payne's gray on a yellow oxide ground, and added just a blush of cadmium orange on his shirt. I worked from photographs I thought I'd taken when, years ago, my son drove me to a surf beach called Twin Rivers. While he was happy for the gift of the painting, he said I was mistaken, that a good friend had taken the pictures and the location was actually Jordan River Beach. My other son, who's also surfed at this popular winter surf location, confirmed it was Jordan River. I'm not sure how the photos got into my files but I have good memories of both places, watching my boys surf!