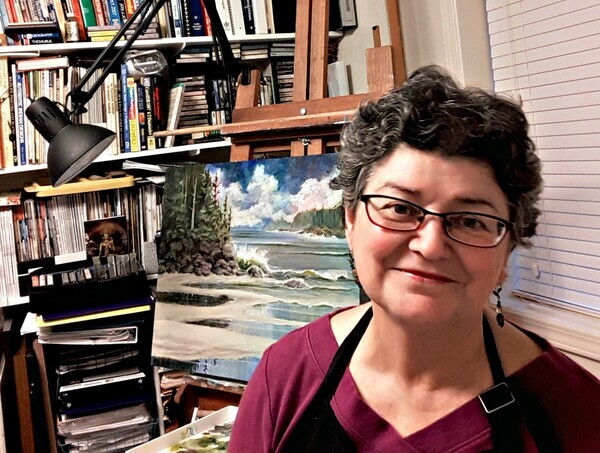 I love Vancouver Island! Every part of the planet is uniquely wondrous but, in my mind and travels, you can’t beat Vancouver Island— including the Gulf Islands— for their variety of paintable landscapes and diverse ecosystems. Walk the shorelines, lean into a coastal wind, climb mountains, explore valleys and forests, paddle lakes and marshes, and discover so many natural places and interesting people. Do islands really attract eccentrics? Evidence suggests ‘yes’! This island has so many artists and creative souls that, if my work is not to your taste, you will surely find another Island artist whose work is! So with that preamble to place, welcome to my web site!

Catherine drew as a child but postponed serious painting until later in life. Primarily self-taught in water media techniques, she has a Bachelor of Science (Geography). Prior to painting full-time, she worked for Parks Canada at Pacific Rim National Park and in Calgary, and then for the Government of British Columbia in Victoria. After leaving public service, she focused on her art, inspired by the geography and natural history of Vancouver Island. Catherine now interprets its landscapes in watercolour and acrylics, with attention on the changing moods and energies of the west coast and island communities. She's lived on Vancouver Island for most of her life and now in the Cowichan Valley since 2003.

Inspired primarily by the natural environment, Catherine, when in her teens, met Canadian ‘Group of Seven’ artist, Arthur Lismer, who, besides being a well-known painter, was known for teaching and establishing children’s art centres. He encouraged her and planted the seed of a dream that she might one day paint too.

When I was fifteen, I worked at the original Wickaninnish Inn, located then at the south end of Long Beach on Wickaninnish Bay. Arthur Lismer and his wife, Esther, stayed there each summer in one of the Inn’s beachfront cabins. As a young waitress, I served their meals and, in small talk, told Mr. Lismer about my own drawings. He generously invited me to see the brush and ink paintings he’d done that summer, which were pinned around the walls of his cabin; he also showed me the brushes he used. Regrettably, I did not understand what a titan of Canadian art he was until I was much older. I also did not know then that that summer was to be his last at Wickaninnish, as Mr. Lismer died the following year in 1969.

As a postscript to this experience, twenty years later when I was working for Pacific Rim National Park, I had the pleasure to meet the Lismers’ daughter, Marjorie Bridges. We spent a day walking the beaches that her parents had enjoyed over so many summers there. I was happy to share how her father inspired me and to show her some of his painting locations around Wickaninnish and, most notably, his namesake ‘Lismer’ Bay.

My intention is to explore painting with a light hand and a limited palette. While my work is primarily representational, it is not to replicate a place exactly. Instead, my paintings try to capture a personal feeling of a place I know, with a specific memory or story in mind. As a continually developing artist, and with each new piece, I am learning to both paint and live more fully in my own creative voice.