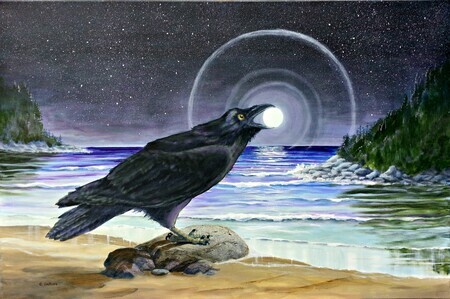 For this painting, I wanted to portray a night scene, a moon and either a crow or raven, which was to look like it was holding the moon in its beak or perhaps plucking it out of, or putting it into, the night sky; I wanted the ‘story’ to be open to different interpretations. I was then surprised to realize that, according to the First Peoples of British Columbia, the Raven, or "Trickster", had in ancient times created the land, released people from a clam shell, and brought fire and light to the world. Prior to that, the world had been an all-consuming, inky black night. An old man, who had been hiding the light, was tricked by the Raven to release it for all. And, as he flew off, the Raven spilled some of the light to become the Moon and the stars. My painting seemed so aligned with the elements of that ancient story, I called it "Trickster Moon".