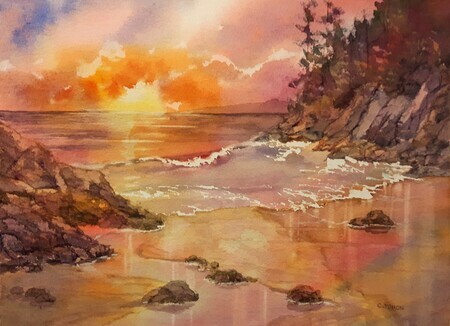 I did a previous watercolour called, “Peace Like a River”, and named it for a popularized hymn of that name, often sung by children. For this painting, I wanted to pick up on the song’s second verse, “Love Like an Ocean”. I don’t usually have a name before I paint, instead letting the painting itself suggest its name. This time, having the name already in mind, I had to ask myself: What would “Love Like an Ocean” look like? I do love an ocean view, but how do I make it ‘say’ love? I decided to really push its colour, suggesting a rose-coloured outlook, which can sometimes happen with ‘love’. I also thought it should be a soft and comforting ocean, like a warm summer’s evening, when the shore winds and surf have calmed. But mostly, I wanted to challenge myself to be bolder with colour. And then I thought that that was fitting too because embracing love (and exaggerating colour) can both take some courage. While this painting could be of any west coast beach, my inspiration was a small pocket beach, between Tonquin and McKenzie beaches in Tofino.